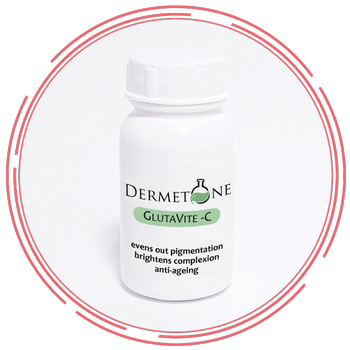 Glutathione is the most powerful antioxidant in our body.
Essentially Glutathione is a magnet, passing through each of our cells, gathering up toxins and heavy metals in order to purge them from the body.
Glutathione supplements help to whiten the skin in a couple of different ways. Melanin is the pigment that gives our skin its color, produced by the activation of the enzyme Tyrosinase. Glutathione binds to Tyrosinase and helps prevent the enzymatic pathways from producing melanin. The second is a much more important role. Glutathione helps to prevent the activation of Tyrosinase by reducing free radicals in the body that can activate it and cause an increase in melanin production.

Not only is glutathione safe, it is essential for even the most basic immune function. The foundation of our immune system, depleted levels cause illness and disease.

Q. Are there negative effects of Glutathione?

While the current science is unclear on the safety of glutathione supplementation for pregnant or breastfeeding women, it is suggested to consult your physician when supplementing. If taken as an inhalant it can worsen some symptoms of asthma.

Yes, just because levels don’t begin to drop dramatically until after age 20, our modern environment bombards the body with toxins and depletes glutathione levels in everyone. Children supplementing with glutathione will be building a strong immune system that will fight off infection and not allow the buildup of heavy metals in the body.

Q. What are some common side effects of Glutathione?

Expect clearer thought, increase in energy, deeper more restful sleep, fight off illness’ before they start, stronger more rapidly growing hair and nails, clearer vision, and an overall well-being that cannot be compared with any other health supplements to date.

Q. What is the best Glutathione supplement?

When looking for the best Glutathione supplement you need to look for a few different things. Look for precursors that improve the body’s natural Glutathione synthesis like, N Acetylcysteine and Alpha Lipoic Acid and Selenium.